Afro-reconstructions in the Caribbean. Visual archives and embodied memories. 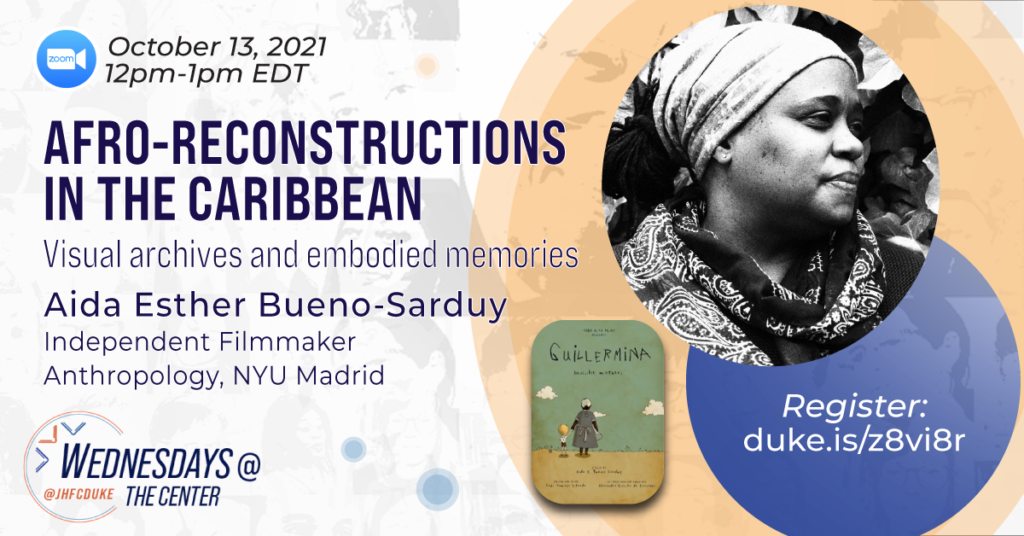 Afro-reconstructions in the Caribbean. Visual archives and embodied memories.

Join us for a screening of “Guillermina,” and a discussion with the filmmaker Aida Esther Bueno-Sarduy.

Based on a true story, “Guillermina” is a film that reconstructs the memories of the trace left in a 9-year-old child, the son of a well-to-do family in Havana in the 1940s, his wet-nurse, a black woman named Guillermina.

Aída Esther Bueno Sarduy. Cuba. Filmmaker and Anthropologist. She holds a PhD in Social and Cultural Anthropology from Complutense University of Madrid and has completed advanced studies on race relations and black culture. She is an expert on the cultures of the African diaspora and female leadership in the Xangô de Recife religion. She is currently researching cases of enslaved women who sued for freedom before the courts of Pernambuco, Brazil, in the late 19th century. Since 1999, she has taught in different departments at several American universities, including NYU, Middlebury College, BU, Hamilton College and Stanford. She has worked as a researcher at the Centre for Studies on Migration and Racism (CEMIRA), part of the Department of Social Anthropology at Complutense University. Aída teaches courses in Spanish Anthropology, Anthropology of Ibero-American and Migration Studies, as well as Cultural Diversity. Guillermina is her first film, she is now working in her opera prima feature length film on the life of Brazilian Afro Leader Ana Borges do Sacramento along with famous Argentinean Filmmaker Lucrecia Martell, which counts with support of Sundance.